Just a couple of typographical errors in the Cliff Transcript that we could do with fixing ASAP, as they're coming up to the time when they print them all off for graduation.

1. The signature box has an extraneous forward slash after "Registrar" that could be removed. If the statement above it could be changed to say "Approved by the Cliff College Examination Board. Credits/award validated by the University of Manchester." rather than the current text, that would be great.

2. "Programme" displays the programme name twice (I suspect because of how we've set up the Degree Major and Tracks - could this remove the first one so it only displays the Degree Track?

3. When credits rack up to in the 100s, they spill over a second line, which looks pretty messy and adds a lot of extra space later on. We'd be happy for you just to remove the decimal places, since Credits and ECTS are always whole numbers in the UK system (this fix would be nice for all UK schools, actually!)

3a. Cliff would really love to have the cumulative credits only display at the end of a Year rather than at the end of each term. I realise this might be a more difficult change than the others, so if the others can be done more quickly please do so, and we'll wait on this one.

Thank-you for your help - sorry for the short notice, the transcripts aren't something we've used for Cliff a great deal yet, but they're coming up to a crunch point on that front! 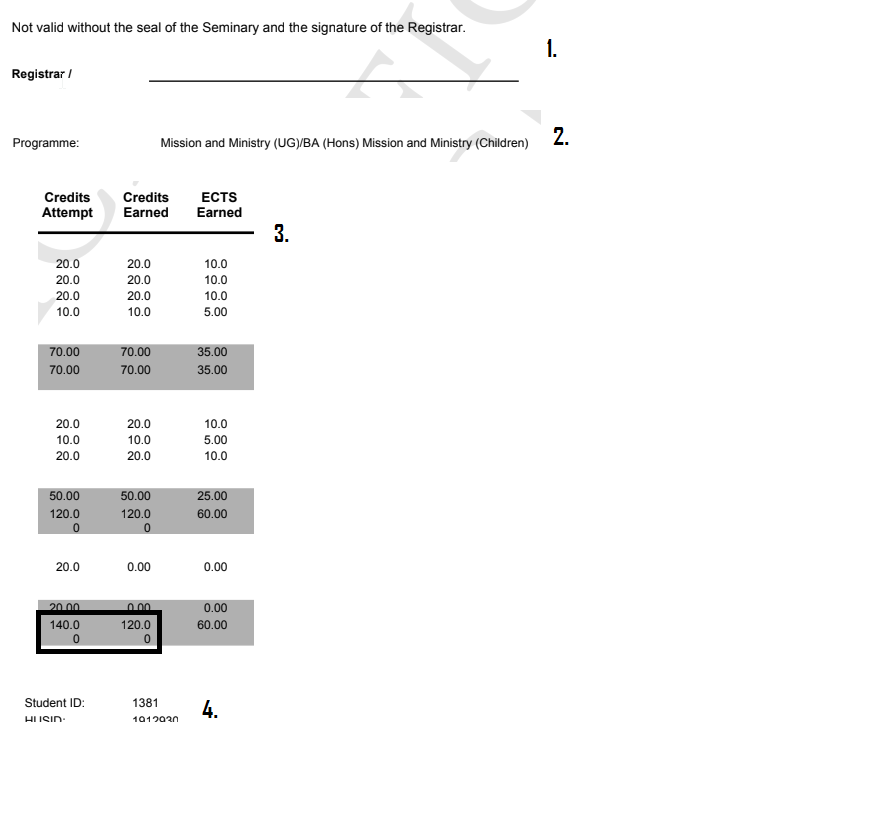 I have opened a priority task for this group of changes.

Thank-you, that's fantastic. Could you let me know as soon as they're implemented? I know Allison will want to get printing transcripts as soon as she can. Thanks!

For the Registrar name, it puts the registrar name from Host then ", Registrar.  The field in Host had Registrar / Academic Dean in the field. I switched it to Allison Cooper. Thus the Transcript now has Allison Cooper. The field will need to still be corrected so its below the signature line.  The second part is able to be updated by the school. The text field is in Host, Additional Information, Transcript Not Valid Description Text.  I updated the text as you requested.

This administrative system is designed for use in both religious and secular universities, allowing collaborative opportunities among schools, seminaries, and non-traditional programs around the world.